skip to main | skip to sidebar

The local chapter of the Audubon Society, Golden Gate Audubon, has printed a short story about biking and birding big year in their April issue. Go to their newsletter page at: http://www.goldengateaudubon.org/html/thegull/thegull_main.htm

Or download the article at http://www.goldengateaudubon.org/html/thegull/current/Apr09Gull_FINAL.pdf
Posted by Andy at 8:04 AM No comments: 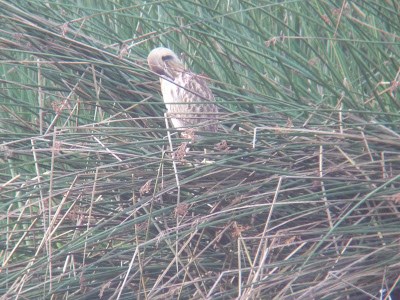 It's now really over. Turns out Josiah and I actually tied in our species counts for the year. He added a couple of good species late in the year including Northern Shrike, American Bittern and Barrow's Goldeneye, all good birds I didn't see all year! So we both ended up with 295 species (294 without Eurasian Teal). Just a day or two into 2009 I found the bird above, an American Bittern, in the rushes at nearby North Lake, Golden Gate Park. Shoot! One more species I could have found in 2008.

After finally getting my list straight, I can't believe how close Josiah and I both were to seeing an amazing 300 species in one year by bike. Josiah added three species relatively nearby I could have seen had I just gotten out on my 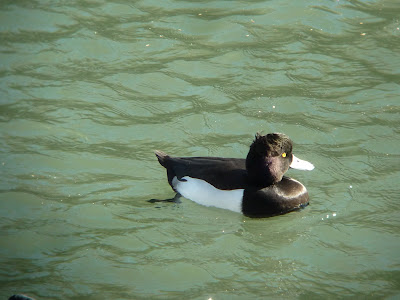 bike (too busy with other holiday stuff I guess). Add this to two or three species I probably could have seen had I put in a little extra effort, such as the Tufted Duck in nearby Oakland, shown above, and I could have definitely broken 300 species by bike. Of course, I could not have even come close to this locally--it all depended on our big bike ride all the way to Mono Lake and back in the summer.

Finally, the year is over. No new birds for the year since my last posting. I did however have a new San Francisco species, a small flock of Yellow-headed Blackbirds that flew over the Presidio during the San Francisco Christmas Bird Count. 2008's BIGBY (or by bike list) is at 294 ABA species (one more if you count the Common or "Eurasian" Teal seen this spring at Las Galinas). And I saw 234 species in San Francisco by bike. That's pretty good for a small county. Even though I went on some long rides this year, this was really about birding locally.

Well it's been a good year. You learn a lot by focusing on birds relentlessly, day after day, for a whole year. I think a lot more than you would in a years worth of observation spread out over parts of many springs and falls. Birding every day really gets you in touch with the seasons and the movements of birds in a way that otherwise you just see little fragments of.

And it was all self-propelled/zero emissions/non-polluting/car-free/by bike/by foot. You learn a lot by biking every day too, for instance, how heavily favored cars are out here in California. Everything from the traffic laws, the roads, the urban planning, the vehicle designs and even the attitudes of the people makes biking harder than it could be. Nonetheless, if you find your niche, and know the roads you bike on, you can enjoy biking most days. It was great to see a lot of birds this year. But truth be told they're all birds I could see again by car or jet quite easily. Honestly, a more important measure of this big year would be the number of bike trips I inspired other people to take. I know some co-workers took up biking to work a little extra, in part inspired by my enthusiasm. And even my own mother--who's driven to work her whole life--is talking about getting a bike and riding it to work once in a while (Mom, it would be a really pleasant ride if you did decide to do it!). I really hope too, that a few of the complete strangers who we talked to on our trip across the center of the state--"You two bicycled here all the way from San Francisco!"--will think to themselves that they can do it to, and that it is possible to get somewhere far away on your bike. This applies especially to birders. Let's follow the lead of Malkolm Boothroyd's Bird Year, let's not just see an exciting list of birds this year, but lets also make every trip to see a new species an adventure.
Posted by Andy at 7:31 PM 1 comment:

Oh boy... well since I last wrote, San Francisco has been graced by some really rare birds (locally at least). First a Black-throated-green Warbler showed itself near Stow Lake in Golden Gate Park in early November. Luckily I had good looks at it, a life bird for me, on my way to jury duty downtown. Then we had some really nice east winds which late in the season make for good waterfowl watching conditions on the coast. From the Presidio we saw a couple of mixed flocks of Snow and Ross's Geese in mid-November.

For the next month I did almost no birding in a last-minute, probably ill-advised, attempt to apply to graduate school (ugh..). I was roused from my bird-less period by the appearance of a real rarity, a Worm Eating Warbler in a tiny downtown park. (Walter Kitundu got some great photos: http://www.kitundu.com/birdlightwind/12_26_08.html). I also added a more regular winter rarities in Golden Gate Park, including a Swamp Sparrow at North Lake and a Yellow-bellied Sapsucker at Hippie Hill. I pedaled off last week in search of a Long-eared Owl (very rare for the city) but struck out. So my BIGBY list now is 231 for San Francisco, and 292 in total, having dicided to count the Least Flycatcher from September. Christmas count season is well upon us. I would love to add some more species to the list but I'll have to bike.
Posted by Andy at 5:30 PM 1 comment:

For a Bigby-er, having rare birds show up in your home town a few miles bike ride from home and work is ideal. And this past week I've been blessed. Other birders around the city found FIVE species that I added to my San Francisco year list and three for my total list. My total Bigby list now stands at 283 (see the right side bar) and my list just for San Francisco is 224. What were these great new birds? Read on:

On Tuesday evening a RED-THROATED PIPIT was found by Hugh Cotter at Crissy Field. I rushed over as the sun was setting to see it. Unfortunately, it was dark by the time I got there. I found Hugh and Josiah standing in the field pointing about twenty feet in front of them. Apparently the bird was there hiding in the grass right under my nose.

I came back the next morning with a legion of other birders and had success seeing this first San Francisco record. I even go some photos: 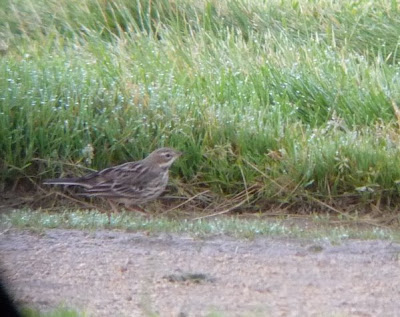 Then believe it or not, another very rare bird for the city was found the next day with this same bird: a LAPLAND LONGSPUR. I rushed down after work to see this bird as well! To make matters more unbelievable, it turned out there was ANOTHER Red-throated Pipit. And finally to cap it all off, another very rare bird for the city showed up: a VESPER SPARROW--a new bird for my San Francisco Bigby list.

Earlier in the week I had added a couple of new species to both my year and my city-year lists. On Monday, there was a strange east wind and I went up to Hawk Hill with Josiah. We ended up getting close views at a Broad-winged Hawk, my first for the fall (though not the year). I looked into the pines and had my year Blackpoll Warbler. The next day at Lake Merced I saw another Blackpoll Warbler that had been found the day before by Dan Murphy. Here's a photo: 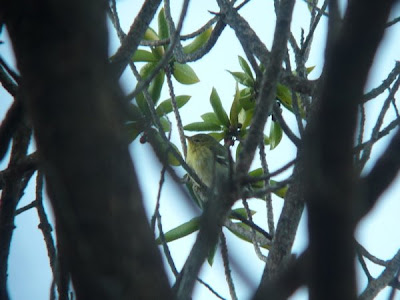 There was also a Common Moorhen. My first for the year. And a flyover Merlin: a new city bird. I leave you with another rare bird for the city (not a year bird though) this Green Heron at Lake Merced: 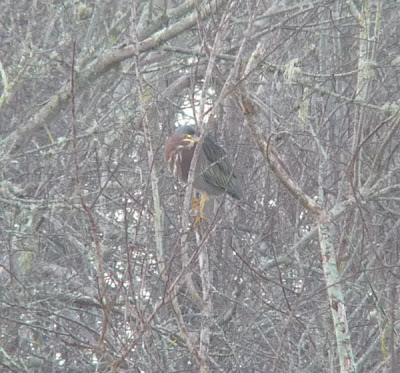 Well we did another big day by bike on Wednesday October 1st, with an unofficial total of 140 species of birds seen in Marin County between 5:30 AM and 8:30 Pm. We had a couple of good fall specialties including 2! Palm Warblers, one above Stinson Beach on Highway 1 and another at Pine Gulch Creek at Bolinas Lagoon. We added one new year bird as well: Black Rail at Corte Madera Marsh. It was a fun, less exhausting, edition of our spring big day. We didn't break our spring record (not surprising) largely because we couldn't find very many species of ducks: no mergansers, scoters, Buffleheads, goldeneyes, scaup or Ring-necked Ducks. Thanks to everyone who contributed to PRBO this fall.

Since my last post we (Josiah and I) have added a few new birds to our respective year lists. I added Gray Catbird, rushing to Golden Gate Park moments after Brian Fitch found it. I also rushed to see other pre-found rarities includinging a Tropical Kingbird at Lake Merced and an Orchard Oriole at North Lake.

Today I was lucky to get a call from Dominik Mosur, who directed me to a waiting Blackburnian Warbler at Fort Miley at Land's End. That's the last new species I've added. What's next? Maybe something really rare.
Posted by Andy at 7:46 PM 1 comment:

Back on the mainland

After five days of chasing mega-rarities all over Southeast Farallon Island, I'm back in SF proper. Friday morning at Sutro Heights Park one of the first birds I looked at was a basic plumage American Redstart (a lot of those around!). Overall things seemed pretty quiet though. I went to work in the Presidio. Just as I was about to leave the office at Fort Scott, I glimpsed a little bird hovering below a pine. I got my binoculars and checked it out--a dull emidonax flycatcher. I followed it around and got some pretty good looks. Notoriously difficult to identify, North American empidonax flycatchers comprise around 10 species of non-descript neo-tropical migrants best id'd by their calls. This one was grayish and silent. Having just seen a few Least Flycatchers on the Farallons I thought this was a good candidate. Pacific-slopes Flycatchers are the most common around here and this bird did not look like one to me. It was dull grayish green, not the bright yellow and olive of a Pac-slope. And it's eye ring was not tapered to a point in behind the eye. Neither did it look right for a Hammond's or a Dusky Flycatcher, both of which have a mostly dark lower bill and a grayer head that contrasts with a green body. Also the pale edging on the wing feathers, best seen from behind, contrast markedly with the overall dark color of the wing feathers. So I guess it could have been a Least. I'm going to let some folks weigh in on the photos before I call it. Click on images for a larger view. 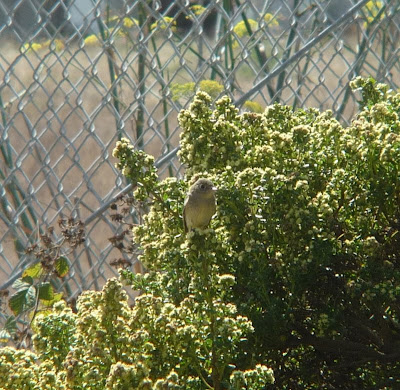 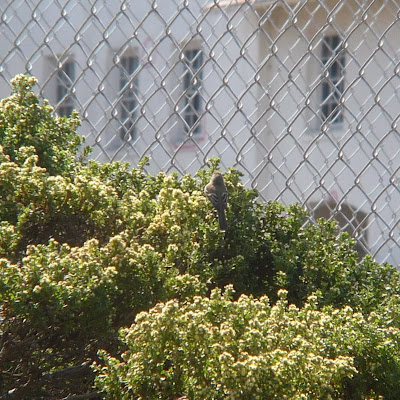 Who else birds by bike?

Have Tripod, Will Travel Andy
Logan, utah, United States
Birding for three years now, it's become a fundamental part of my daily life. Spurred by the Big Green Big Year or Bigby, and Malkolm Boothroyd's epic Bird Year, I want to make 2008 a big year for me too--and I plan on doing as much of it as possible on bike. This has been my usual method of birding since I met local San Francisco birder Josiah Clark and he clued me in to the virtues of birding by bike.